For those Ubisoft’s Division players out there, I am sure you have heard, came across or even have exploited the glitch in the game. Since it was launched about 1 ½ month ago, the game was plagued with glitches. Some were really game breaking i.e. the backpack and the character deleting glitch.  Some were exploited i.e. the latest incursion, dps and dark zone xp glitch. But it does amazed me on how players are able to discover those glitches in the first place because it does need you to go through certain steps that may not be a player norm task, to be able to make the glitch happened.

Anyway, a lot of those glitches will be patched and fixed and for those who have exploited the glitch, Ubisoft has made a statement that a 3 days ban or a permanent ban will be issued out to them. I personally don’t agree with the stance.

Glitch is generally programming loophole / software errors that went undetected by the game developer (for whatever reason it may be). I suppose it will be a different scenario if it was the player who hacked the game or use a third party software to exploit it. I may not be an expert on this but the way I see it, these are errors existed because of the incompetency of the game developer to identify and have a solution to them fast enough or before the game is released. Hence, why are the exploiter being penalized for the fault of the developer? Of course, then there is an argument of fair play but I am in the opinion that it is up to the player on how they want to play the game as long as they did not hack or no third party software is used by them.

But I am interested to see how the player base will drop once the banning starts to happen. At this point of time, there is nobody on my friend list (who played Division) who have not experience the glitch before.

But did I glitch? It is for me to know and for you to find out. LOL.

Let me know whether you agree with me.

Another year has just gone by.

On the business front, it was definitely a very fruitful year with the opening of our retail outlet​ ​at Atria Shopping Gallery​ in June. ​We have been toying with the idea of having a physical outlet and ​was scouting around for 2 years​ before we​ finally​ decided on Atria. ​Undoubtedly, business has not pick​ed​ up as fast as we envisioned ​as the general footfall to Atria is still somewhat low; but together with the online component, we are​ still doing​ ok and I am sure it will be better in 2016.

In terms of games, I don’t think there is ​any title​ which​ stood out for me ​in the past ​year. ​With most games, ​I​ get the “same-old, same-old” ​kind of ​feeling. Dying Light was pretty good but the trophy glitch was a turn off ​for me to ​continue further (​as I am a trophy hunter). The release of Destiny Taken King did rejuvenate my gaming life a bit towards the 3rd quarter of the year but not for long. ​I ended up playing a lot of remastered games​,​ i.e. The Last of Us, Darksiders 2, Tomb Raider and Uncharted Trilogy (I skipped Sleeping Dog and Deadpool) and not forgetting, the old PS2 classic RPG, Rogue Galaxy (via newly introduced PS2 emulator on PS4 feature).

Two low​ points for ​me ​​in 2015 - ​my 3​-years​-​old PS4​ has​ given up on me with the irreparable auto-eject problem​ and the introduction of GST. For GST, I am sure ​its effect can be felt in​​ the entire industry. ​We used to be able to get newly release​d​ titles at a cost price of RM130 to RM160. But now, some ​of the cost price ​has gone up to RM200​! ​Generally, we ​noticed a decline in the consumer​'s​ spending power​ resulting in them being more price conscious and particular on their buying choice.

But on a brighter note, I bought two new consoles to add to my collection, an XboxOne (to replace my spoilt PS4) as well as 3DS (to replace my abandoned PS Vita).​ I've​ been pretty hooked ​on the old 3DS game, Bravely Default and Xenoblade Chronicles (port from Wii). I am now also a proud owner of the white colour, Destiny Limited Edition PS4 console.

2016 does look promising in terms ofthe release of ​titles. One can only wish the release date will not be pushed back and I secretly wish that they will remaster Final Fantasy XII to PS4. Even though I am a bit lukewarm about the upcoming release of the VR Headset, I am still very curious​ about​ the gaming experience. I always have this crazy imagination that I will lose myself from the real world and eventually just snap and drop dead from playing too much on VR. ​

Finally, I would like to take this​ opportunity to give a special shout out to all ​​GameO​n​ retail team members​ -​ Akmal​​, Patrick, Hong, Alicia, Sarah, Desmond and Chris. And ​of course, to all our supporters and gamers out there. Have a great 2016!

Why did GameOn choose “local performing arts” as our CSR direction? Little did everyone know, we have been donating and contributing in our small way to the local performing arts industry since 2011. We have even created a new prize category with Short + Sweet Malaysia in recognition of the local songwriters. So here goes, the top reasons in our humble opinion:

a). Instead of the question why, “why not”? (duh…just kidding)

b). It is one of the least supported non-profit industry in the country be it from individual, corporate or government. Hence, I do think it needs our attention (however much we can contribute).

d). Echoing point (C), we do believe in the saying “Science is the food for your mind and Arts is the food for your soul” (quoted from Dato’ Faridah Merican also known as the first lady of performing arts). It helps to create a more balanced and cultured society / community.

e). One of our company director is actively involved in the performing arts. He is a singer-songwriter himself too. Hence, the inclination.

f). The industry provides job opportunity. In fact, a lot of the theatre spaces / arts centres do help to vitalize the surrounding areas and makes the economy more vibrant. 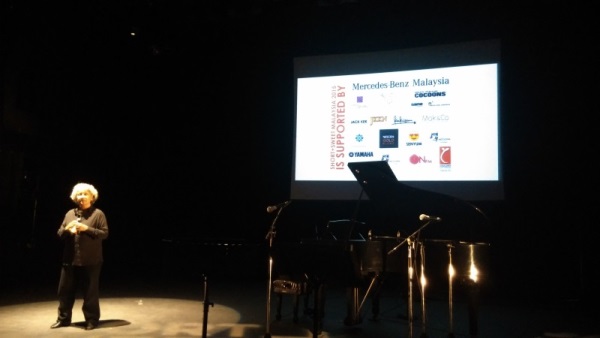 *The Short + Sweet Classic / Choral on the second night – intro being done by the Dato’ Faridah Merican, Festival Director. Can you spot GameOn's logo on the projection?

This will be our 4th time supporting Short + Sweet Malaysia as part of our company CSR; in support of our local performing arts industry. Since we begin the sponsorship in 2011, GameOn has created new award category with Short + Sweet Malaysia to give recognition to new songwriters. Click here for more information or to buy your ticket to attend the Festival: 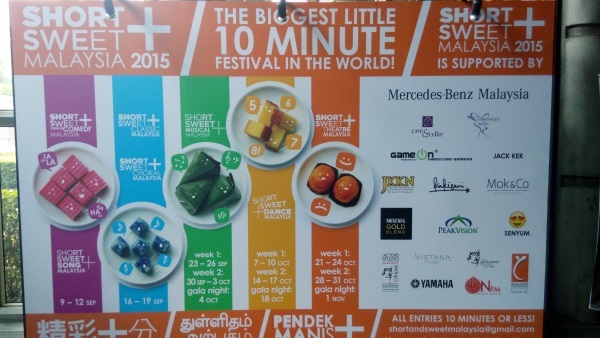 (The photo op board at The Kuala Lumpur Performing Arts Centre. Take a photo with the board and e-mail to ian@gameon.com.my to get a special discount code for your next purchase)

How excited are you?

Year end is coming and as we know it, there will be surge of major and AAA titles being released for the next few months. So, what is your most anticipated game?

From GameOn's side, this is our team members' Top 3 most anticipated games:

So what is yours? 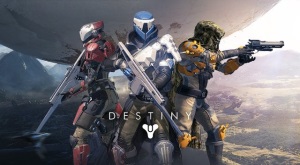 Wow! In case you have not heard or read about it yet, these changes in the upcoming Destiny Taken King Expansion really makes me want to go back to the game. I have stopped playing ever since I have completed the House of Wolves' campaign missions.

a). We will now have a new ghost voiced by the famous Nolan North (best known to us from the Uncharted series)

b). Leveling system that is based solely on XP. Light level determines the attack / defense rating by averaging your entire equipped gear. You can get to the max level by doing activities that will provide you with XP.

c). New level cap to 40 with a third subclass for each character

d). Whole host of new Year 2 Exotic and Legendary with the ability to infuse weapon / armor to make the current one stronger

e). Revamped faction reputation system and only one type of mark, Legendary Mark

g). New quest interface with the ability to turn in bounties without having to return to the Tower (Woohoo!). And also, you can track up to 4 quest at the same time.

h). Cryptach selling legendry engram and weaponsmith also has its own quest line 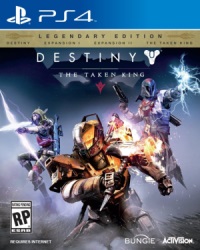 XboxOne? Are You Serious?

. Nope, ​it​'s still not ​launch​ed​ in Malaysia. ​I purchased an imported unit and here is my user experience sharing.

The initial installation time didn’t take too long. ​T​he ​ubiquitous green screen ​containing Xbox’s logo ​flashed ​on for about a minute or two before ​proceeding with a step​-by​-step installation guide ​for the 2GB patch download. As ​the Xbox One​​ has not been launch​ed​ in Malaysia, ​the ​filling up ​of ​personal particular especially the payment billing info can be a bit tedious. But the good thing is, the Xbox Live system now accept​s​ Malaysian credit card.
​After the setup,​ the display will lead you to the Home screen which is very overwhelming​, as it is messy, confusing and takes a lot of getting used to. Mind you, I​ previously owned the Xbox360 and I don’t remember experiencing this​ then​.​ ​It took me a while to find the Tutorial a​nd​ Setting​s​ page. But I ​do ​appreciate ​the fact that the console has a setting calibration for HDTV​,​ which was great​, ​as I have never calibrate​d​ my TV before.​ ​The customisable gamer pic and avatar is ​also ​a very cool feature. ​I manage​d​ to customi​s​e my avatar to ​closely ​resemble m​y​self.​ 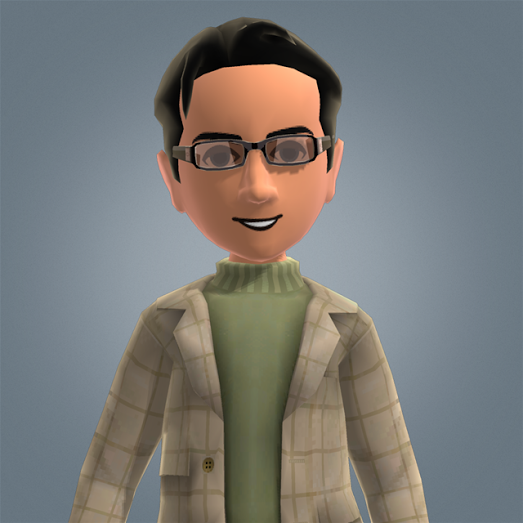 ​Similar to that of the Xbox360, I like the controller very much and I find ​that having ​the rumbling pad set nearby​ to​ the trigger button ​provides a unique experience​​. However, ​from ​an ​environment​al-friendly​ ​standpoint, I don’t understand why​ ​the controller doesn't come with an in-built rechargeable battery​ and still uses AA batter​ies​. ​On top of this, a USB connection to the console​ is required​ to update the controller with a new firmware (​though I ​heard that this will be rectified in the next version of controller that comes with the 1TB console).
I am sure you have read on other review sites that Xbox One can be a bit heavy and bulky and this ​is indeed true. As a PS4 user as well, I can’t help but to feel the processor speed of Xbox One or the way it is programmed is so sluggish. For example, it take​s​ a good amount of time to install a game onto the hard disk. I also loathe the fact that you can’t ​perform multiple download​s​ at the same time and if ​a​ game is being updated, that game will not be playable. This is a ​major irritant as one would have thought​ that​ ​these ​features would be present in the current gen console​ to enhance one's gaming experience​.

​In terms of games and graphic​s​, I really don’t think ​one​ can tell ​if there is​ a​ difference between ​​Xbox One and PS4​,​ unless I p​lace​ them side by side.  I have been playing more o​f​ the exclusive​ Xbox One​​ ​titles ​such as Ryse, Sunset Overdrive, Neverwinter, Dead Rising and I must say​ that​ I enjoy th​e​ gaming experience​ overall​.

Well, that is my short review of the Xbox One ​for now​. Please do add me ​as ​your Xbox friend. My Gamertag: GameOncommy​. Let me get back to gaming now.... :) ​